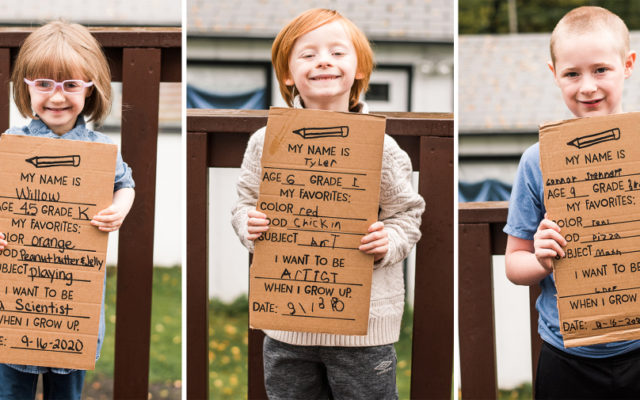 Sort of. More dipped our toes into it.

The week started out a little crazy because two of our kids had birthdays on Tuesday. We were going to do a baking “lesson” on Monday, but we were busy with other birthday details and ran out of time and steam. So, in the usual fashion, we last-minute rushed baking them on the morning of their birthday, when they were needed later that day.

Putting a bunch of messy cooking materials like flour, sugar, oil, etc in front of my kids and saying “have at it” was a little difficult (how much am I going to have to clean up after all of this?!)

I have a hard time stepping back and not helping. So I had to learn a little bit about allowing them to make messes and mistakes, and finding a way to let them do it without hovering.

It’s not as easy as it sounds…I mean, maybe it is for some people, but not for me…I was on standby with a rag and a vacuum the whole time. Our last house was TINY and so hard to clean, so any little messes set my radar off these days and I have to deal with them immediately for fear of a gross and boring disaster deep cleaning later.

Once they learned how to accurately measure the ingredients and I told myself to calm the f down, they did a great job on their own while I directed them on what to do next.

Tyler and Willow really got into baking and wanted to make the frosting as well.

I don’t know if they learned anything, or if it was more of an exercise for me in patience and not smothering them while they figure out how to do stuff on their own, but the cupcakes turned out edible and the frosting was delicious, so I’m calling it a win.

In case I didn’t cover it yet, our birthday twins are NOT actual twins. Arialle turned 16, and Connor turned 9. We didn’t plan their birthdays to be on the same day at all, but Connor arrived 6 weeks early on Arialle’s 7th birthday anyways due to preeclampsia. He spent about a month in the NICU, but he’s a strong healthy guy now.

Celebrating a birthday during a global pandemic is a little tricky, so we set up an outdoor movie theatre for our teenager and her boyfriend and decorated our little gazebo with lights. We set up a projector and used one of the backdrops I have on hand for my business as a screen. It was such a hit, the younger kids watched their own movie on it as well, and wanted to have a breakfast picnic outdoors the next morning.

Thankfully this week – FINALLY – part of our homeschooling curriculums arrived!

They were big, heavy boxes decorated with fun pictures, so of course the kids couldn’t wait to see what was inside. We waited a day because I am still not sure where I’m going to put all this stuff, and I didn’t want to take anything out of the box until it has a place.

Feeling very brave and refreshed the next morning, I opened all of the boxes and scanned the materials. Luckily, they came with a guide book of sorts. As I started reading it though, everything just became overwhelming to the point of not being able to process the information.

This is a huge problem for me, and always has been. I can understand what I am reading, but when it comes to actually recalling and applying it to what I’m doing, sometimes I get lost. It gets extremely frustrating because I end up reading a lot of the same things over and over, and still not quite being able to grasp the concept of the instructions.

Unfortunately, a lifelong struggle with written instructions has led me to generally avoid them completely; usually guessing what I should do next based on what I can decipher from the materials in front of me. There is a horribly built shelf somewhere in the dump now that attests to my lack of abilities in this area (it was finally tossed after the move a few weeks ago). I do not recommend guessing your way through things that require instructions.

Now I know to ask for help though, usually. This is all tied into autism/ADHD/CDD and executive functioning deficits that go along with having those disorders. It’s annoying and distressing when the information I need doesn’t stay in my brain when I need to access it. But guessing my way through educating three kids is probably not a good strategy.

My husband will be helping where he can of course, but he’s working 5 days and 7 nights a week right now, so we barely see him much as it is, and when we do, he usually needs to rest. I feel a bit guilty not being able to run the homeschool show completely by myself, but it is what it is.

I didn’t really have a plan, so I just let the kids explore some of the kits and games that came in their boxes. They actually did a great job learning how to play the games and it kept them occupied long enough for me to make – and enjoy – a second cup of coffee. We kept at low key play learning for a couple hours and called it a day.

Connor didn’t do much with us that day because he was having a tough time. Sometimes his emotions seem to overwhelm him and he can’t explain why, but he gets very upset and has been crying a lot lately, for the last several months. It hurts me to seeing him devastated over every little thing, but I can’t seem to get him to talk to me much about it. I understand him; I’ve felt the same way. There have been days – recently – where I’ve been so exhausted I couldn’t pull myself out of a crying fit that I couldn’t explain. Like a child. I’ve talked to him about it.

They’re called meltdowns, and we have them around here. They used to be extremely disruptive because everyone took them personally, but since we’ve learned more about what we are dealing with and how to communicate and work through things, it’s gotten much easier to ride them out vs. trying to stop them in their tracks (which is sometimes impossible). We know that sometimes people just need space to let it out in their own way, and they may be ready to talk about it later.

But this is more than just being overwhelmed, because it’s every day. It’s constant. Unless he’s constantly overwhelmed, which I guess isn’t too far out of the realm of possibility considering that his whole world has completely changed in the last few months.

And he’s not seeing any of his friends.

And he’s worrying about his Dad getting sick while he’s working all the time.

And he has no sense of normalcy, other than to expect everything to keep changing.

Since he seems so sad all the time, I’ve been trying to talk through his meltdowns at the very beginning stages. I can spot them pretty immediately by now. Frequently, they start because he has misheard or misunderstood what someone has said to him. He takes things very personally and is constantly apologizing for everything. It’s heartbreaking.

Sometimes we are able to right the ship by talking through it and explaining what was really meant, but it’s a battle to get him to even hear me at first. Sometimes he’s just so far gone and so embarrassed that he can’t stop it, he just runs to his room until he calms down. Sometimes he’s so angry or frustrated, he seems like he’s going to explode.

He’s having a really hard time, and I am not sure what else to do to help him. He sees a counselor already. He seems way too young for antidepressants, but I don’t know if they are a reasonable option considering how disruptive his emotions are to his life. I want to be able to do more to help him than just watch him suffer and not talk to me about why he is so sad.

After a little while, the boys and I decided to play Apples to Apples to help redirect Connor’s thinking. I’m pretty sure that counts for vocabulary or something. It’s actually a pretty good game for teaching synonyms as well…I’m definitely counting it as education time. They both beat me, but they also both accept the silliest/grossest answer as the winning card, so I’m pretty sure it’s rigged against moms.

The next morning, Connor decided he was ready to do a project, so he decided to start a 180 piece puzzle globe. Tyler took interest and they started working together to build the puzzle.

Connor sorted puzzle pieces by whether they were blue or green (ocean or land) at first, but then he discovered that there were numbers on the back to help direct him which order the puzzle pieces go together. He asked for some bowls, and the boys started splitting the pieces up into groups (1-10, 11-20, 20s, 30s, etc). This seemed to really work well for Connor as he began to put the pieces of the bottom together.

Tyler jumped in to help and caught on right away. The numbers made it easy for him to pick up where his brother had left off. They took turns adding pieces while the other took a break, but started working together more as the globe took form.

I was so proud of them for working together, taking brain breaks when they got frustrated, and for focusing on the task for the few hours it took to put the whole thing together.

This weekend, I’ll be trying to get organized so we are learning with an agenda. I don’t know if I’ll be successful, but that’s the goal.

I’m trying to be gentle on myself because it’s been a lot for me emotionally these past months as well, especially being thrown into a move and homeschooling all within the same couple weeks. Between unpacking, cleaning, trying to keep my little business alive amid the pandemic, and just parenting four kids, the days are full and exhausting.

I feel good about where we are at today, though. We are making progress. This school year won’t be perfect, but we’re all doing our best.

May 16th, 2022
View full playlist
Connect With Us Listen To Us On