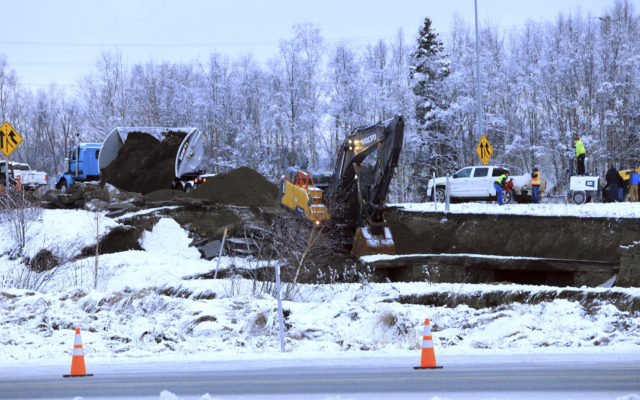 ANCHORAGE, Alaska (AP) – The Latest on the aftermath of a powerful earthquake striking near Anchorage (all times local):

Alaska Gov. Bill Walker says he and his wife will not attend Monday’s swearing-in of Gov.-elect Mike Dunleavy in the rural Alaska village of Noorvik.

Walker, in a statement, says he and Lt. Gov. Valerie Davidson will stay in Anchorage to assist in ongoing recovery efforts following Friday’s magnitude 7.0 earthquake that rocked the city and surrounding areas.

Delivery of food supplies, fuel and other cargo has not been interrupted after the powerful earthquake that struck Anchorage on Friday.

City officials said at a Sunday news conference that damage assessment continues at the Port of Anchorage, but at least one major cargo company is unloading as normal. The other major cargo operator at the state’s largest port expects to offload a barge Monday.

About 90 percent of all goods sold in Alaska come through the Anchorage port.

Authorities on Saturday encouraged people not to make a run on grocery stores, saying there was no need to hoard items. However, at least one grocery store Sunday had no milk, and little to no bottled water, bread or bananas.

Mayor Ethan Berkowitz said the ships are coming in on schedule and the supply lines are not interrupted.

Life is slowly settling down in Alaska following a powerful earthquake that rattled buildings, disrupted power and caused heavy damage to the only highway that goes north of Anchorage.

Employees who live in communities north of Anchorage were encouraged to see if they can take Monday off or work from home to reduce the number of cars on Glenn Highway as crews repair damage.

In addition, Gov. Bill Walker, who leaves office Monday, has given state office workers in the Anchorage area the day off.

The magnitude 7.0 quake didn’t cause widespread damage to structures or collapse buildings.